Loki (Andy) has already done a superb review of the show and can be found Here
But here is my two pennies worth.

What a super show.
Bigger than last year, new building that is about 4 times the size of the venue that was used in 2014. 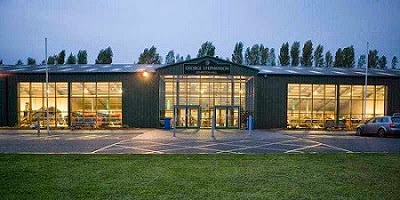 This is the George Stephenson building, impressive venue.
The morning started early for us as we had trade business and handovers to sort out but all this was done by the time the show opened to the public.
Now we were some of that public.
A good mix of traders, although more Historical traders would be a useful addition.
My preferred scale of 15mm was very hard to find (if any)
Colonel Bills was probably the only seller.

The games on the day were excellent.
Every game was a participation game, a unique aspect of the Hammerhead show and one I really like.

The tabletop sale is far better than the old B&B in my opinion.
More, general gamers and hobbyists selling their stuff, instead of the B&B traders that should really have a trade stand.
I found a couple of lovely little treats.
A large bag of 1/72 Airfix Ancient Britons.
Basically 12 complete boxes in a bag, all complete with 24 chariots and in as new condition.
Bargain at £2.
Yeah, two bloody quid, Happy Kevin.
Also a complete box of the Revell, 1/72 Celts, Rocking horse shit find for £2.40.
Boxed and still on the sprue.

After much wandering, talking with friends and drinking tea.
Was nice to see the lads at Ainsty and Col Bills.
Always lovely to see Martin and Diane at Warbases.
A great chat with Mr Priestley regarding BP & HC.
We headed over to the Kallistra stand to pick up our new terrain.

Andy once again beat me to the blog and posted the games room table alterations that were need to accommodate the new Hexon system.

I know a lot of people hate this but, it's my room so, nah nah!
It looks great and will be playing host to some rebellious Scots tonight.

Anyways.
Hammerhead!
What a great show.
If you missed it, you missed a belter of a show.
Well done to the organisers for a superb day.
Again next year, Deffo.
Would be lovely to see Magister there and Maybe OG..
Posted by Kev at 14:00

Email ThisBlogThis!Share to TwitterShare to FacebookShare to Pinterest
Labels: Shows